Schmidt calls on Kelly to immediately remove support from all future performances, pledges as governor to end state promotion and funding for sexually suggestive or explicit material for children

TOPEKA – (October 24, 2022) – Kansas Attorney General and Republican Nominee for Governor Derek Schmidt today forcefully denounced Governor Laura Kelly’s Department of Commerce for promoting at least two “all-ages” drag shows and pledged that, as Governor, he would end state promotion of, and funding for, sexually suggestive or explicit material for children. 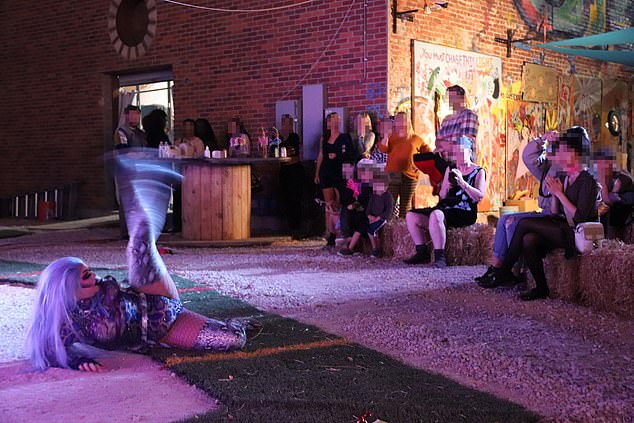 Photo, which includes children in the front row (top right of photo), courtesy of DailyMail.com.

Schmidt said the following at a press conference in Wichita:

“In just the past week, both the Joe Biden administration and the Laura Kelly administration have been caught sanctioning and condoning activities that may expose children to sexually suggestive or explicit programming. In this case, the Kelly Administration has been caught lending the good name of the State of Kansas, through its Department of Commerce, to promote and perform drag shows to which Kansas children were invited – and attended.

“And we already know this particular show is not an isolated case. The Kelly administration is supporting other similar performances.

“Most Kansans do not support this, and Kansans deserve to know how often and to what extent the Kelly administration has used our state’s good name and even committed hard-earned taxpayer dollars to support these sexualized performances to children.

“As a lifelong Kansan, I never would have imagined our state government promoting this. As a candidate for governor I never would have thought this would be an issue in the race.  But because of the extreme liberal philosophy shared by Joe Biden and Laura Kelly, here we are.

“Well, not on my watch. I’m here today to make a pledge to you, the people of Kansas. If you elect me as your governor, I commit that my administration will put a stop to using your hard-earned money and our state’s good name to sponsor or promote sexually suggestive or explicit programming – especially to children. It’s just common sense.

“Governor Kelly has been telling Kansans for months now that she is in the middle of the road. Supporting and funding drag shows for children of “all ages” is not middle of the road. It’s extreme. It’s wrong. It’s not Kansas.  Kansans of all views – Republican, Democrat, Independent – know it’s wrong.  It must stop. Laura Kelly must be held accountable for her administration’s appalling decisions that follow the priorities and values of the Biden administration.

“I call on the Kelly administration to apologize to Kansans, and to immediately remove support of the State of Kansas from all future performances of this sort – no more use of the state’s name or logos, no more state promotion, and certainly no public funding.

“I’m running for Governor to bring commonsense Kansas values to the Governor’s office.This sad episode shows once again how badly our state needs new leadership, and in just two weeks Kansans can hold the current administration accountable and bring about much-needed change at the ballot box.”

According to reporting from the Daily Mail that broke this morning, Kelly’s Department of Commerce promoted “Dada Ball,” a drag show held in Wichita open to “all ages” and marketed to and attended by minor children. The show featured scantily-clad performers engaging in sexually suggestive dances in front of children.

The report also cited a similar event held in Lawrence in June also promoted by the Kelly administration. Subsequently, a flier for a third event scheduled for October 28 at Towne West Mall in Wichita surfaced on social media.

Today’s shocking report about the Kelly administration comes after news last week that President Joe Biden and his administration similarly sponsored drag show events abroad. Reports exposed the U.S. State Department providing a $20,600 grant for a cultural center in Ecuador to host “drag theater performances.” The Biden administration has doubled down, defending the decision as a push for “diversity, inclusion, and representation to equity and accessibility.”